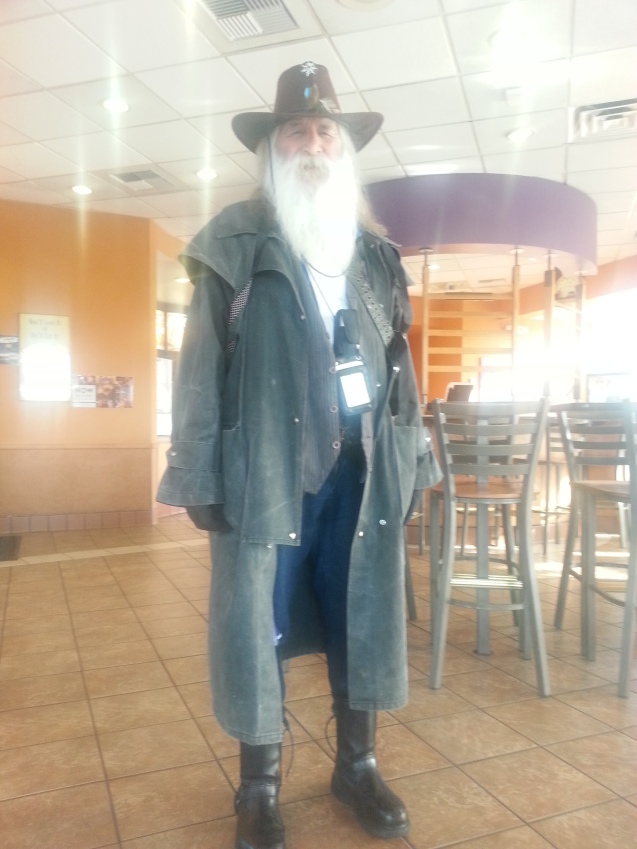 Met him one January morning at a Mexican fastfood place.  He was by himself, I was too.

On his way out I noticed his customized guitar case. “What kind of music do you play, man?”, I asked.  That’s how we got to talking, however brief.

He had a long Spanish name, like Gabriel Garcia Marquez, but with 3 more names added.  So, I asked if he had a short one.  Ron, he answered.  “You can call me Ron.”

He plays Rock N Roll, and said he’s on YouTube playing Welcome to the Jungle. He is a street performer, inviting me to catch him in Venice beach later that day. “I’ll play you a song”, he said.   I won’t be able to make it and told him I had a feeling we will meet again. He seemed to agree.

I asked if I can take his picture with my phone.  He obliged.  “You look like an angel, man.”  I told him as I showed him the image.  He laughed, and patted me on the back.  And started going on his way…he’s on his way to Pico and Western to get his 12-string guitar fixed.

Saw him standing at the bus stop.  I cleaned up my table, walked towards the thrash bin.  Then I looked back hoping to catch one last glimpse of him.

He was gone.  I rushed towards the window to see if a bus passed by. No bus. No Ron.

Me Myself and I